I sit myself down and get ready for MNR and then I hear the words ”welcome to the Season Premier of MNR!” from HHH & Steph so I switch the speed to 1.4x (thanks VLC) because it’s going to be one of those episodes.

There’s a bit of logic in the company shouting about it being a season premier because it’s obvious they did fuck-all to make last week interesting due to it being Labour Day (or something) and no frigger would be watching. The show got the lowest ratings since since Christmas Eve 2012 so yeah, I’d probably pretend that this is a brand new start of a weekly show too.

Anyway, Raw starts with the now-usual segment of two people who are focused on the the business side of WWE playing people who are focused on the business side of WWE and unashamedly plug the Network and the matches later on. HHH then dances with The New Day which isn’t a good sign as he used to imitate Bad News Barrett before they shit-canned the gimmick. 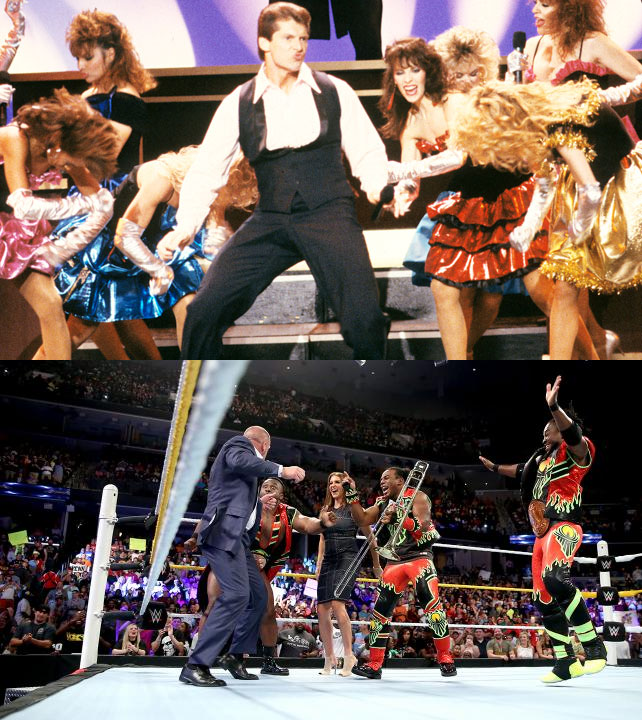 HHH & Steph are still appeasing Seth Rollins’ crazy demands for status and setting Cena and Sheamus against each other. They’re either going for the incredibly slow build of HHH & Steph starting to groom someone else they can control easier or it’s a plot-line that’s not actually happening and I’m just making it up in my head with the small pieces WWE throws at me.

New Day vs. PTP happens yet again because the tag team division is dead as PPV and one of the only challengers for the titles also play the part of ‘make the champs look good’.

You’d think there’d be hatred or raging fumes from PTP considering New Day beat them for the titles (and every time they’ve faced each other on TV since then) but there’s nothing there because they’ve only had ”we’re wrestling each other on PPV because we won a contender match” to work with as a reason for their title matches. This worked for The Usos vs. Harper & Rowan but when the bad guys are way, way more entertaining than the good guys, you’d think they’d add something else. Well, they did. They added The Dudley Boyz and tossed PTP to the side like of Titus’ slams.

Speaking of which, The Dudleyz were shown watching a TV by standing directly in front of it. THEY’LL NEVER MAKE IT IN THIS BUSINESS. 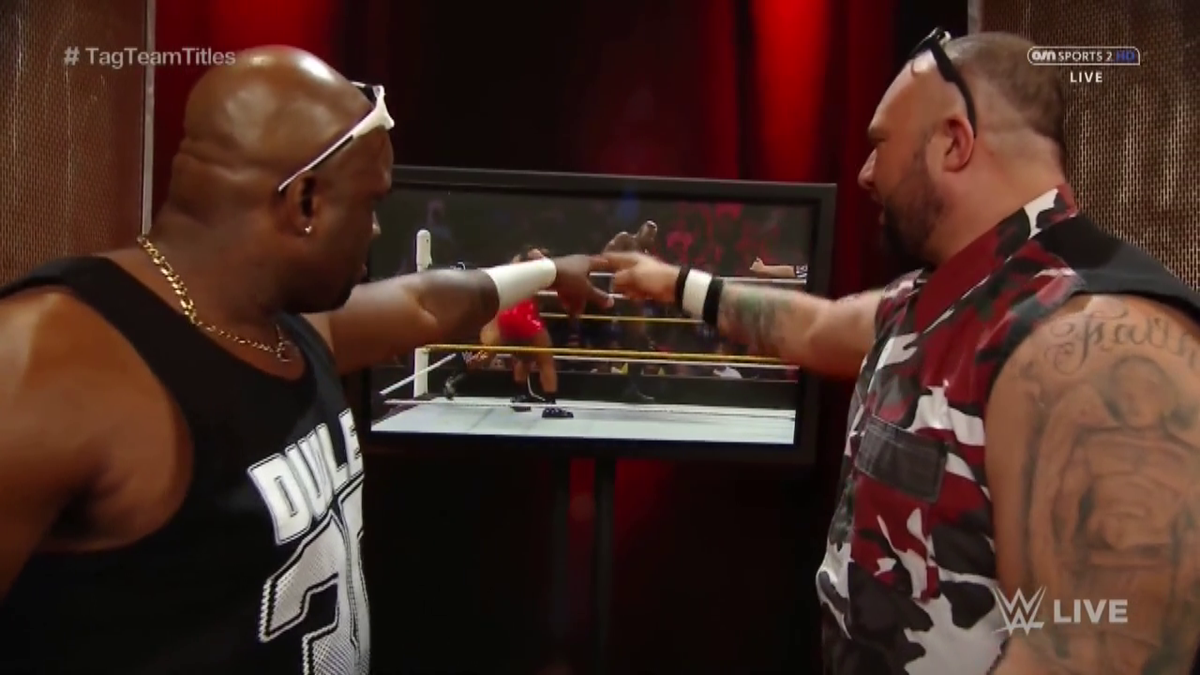 Xavier plays trombone at ringside (after last week’s Final Fantasy Victory Fanfare, Xavier taunts PTP with The Pink Panther theme at ringside) and proves as a wrestler, manager, University graduate, YouTuber, Gamer, Trombone Player that I’m simply not trying hard enough at life. Titus breaks the trombone, turning himself into Titus O’Heel and then loses because fuck him.

THEY BIG THEY STRONG BUT THEY AIN’T GOT NO HEAT

All the SEASON PREMIER mentions reminded me when Orton and Jericho had a match at Night of Champions 2014 based entirely on one segment of Raw where Orton kicked Jericho and said ”Welcome to the season premier!” As Sheamus vs. Cena proved, you can put two name guys together and have them wrestle but if there’s no storyline or feud or reason or shampoo sponsor to wrestle over, who gives a fuck.

The only thing of note was the crowd chanting ”You look stupid” but not at the guy wearing jean shorts and a bright orange children’s shirt.

Ric Flair is here with Charlotte as she takes on Nikki Bella for the Divas Title. He sadly didn’t spot Sting backstage and instinctively tun on him.

Cole tells us it’s Pediatric Cancer Month, the month formerly known as September. Sting wrestles for WWE FOR THE FIRST TIME EVERRRRRRR before they whisper gently ”on monday night raw” and then even quietly ”against the big show” before finishing with a barely audible ”we’re sorry.”

Paige wrestled Sasha Banks. Crowd got behind Paige and she was obviously powered up by that as she murdered Sasha with a German Suplex. But because it’s 2015 she recovered in about ten seconds. I don’t get it. Banks won with The Bank Statement something something Divas Revolution.

Funny seeing WWE fall back on the Enormous Muscle Dude route for the new Wyatt member when the NXT roster is right there for the pinching. Must be because of the success of Mason Ryan, Big Zeke…

Fuck it, we should take bets on how quickly the guy’s injured. Not that I want that to happen. Or that I’m inferring anything from his physique. Cough.

Miz interviews Bray Wyatt and just flat-out asks Bray ”what do you want?” Ha! Miz is great when not wrestling.

Ambrose & Reigns don’t reveal their partner for Sunday but assured The Wyatt Family they found someone. Anybody but Orton and I’m good. This feud has done more for Braun than it’s done Ambrose & Reigns (which seems a bit counter-productive considering those two could be head-liners).

Good Guy Ryback does an absolutely horrible Elvis impression, gets booed. The WWE Creative definitely have their finger on the pulse but it’s on Vince’s wrist to make sure he’s alive. You can almost see the crowd go ”yeah we get it, we’re in Memphis.”

Owens comes out and brings up Ryback’s great promo where he talked about The Secret book. Owens mocks Ryback needing a book to help him but he’s the IC Champion and he’s not losing on Raw every week so Owens could probably benefit from reading that too. Honestly though, they talked shit to each other and gave each other the stare-down and I enjoyed this. The matches should be good too.

I like Ryback. He’s a big dumb guy and usually avoids the shite creative decisions like ”sing Elvis”.

They show clips of Sting winning matches but put a washed-out filter and make 1997 WCW look like Man of Steel. They should have gone the whole way and had it look like The Vaudevillians intro. 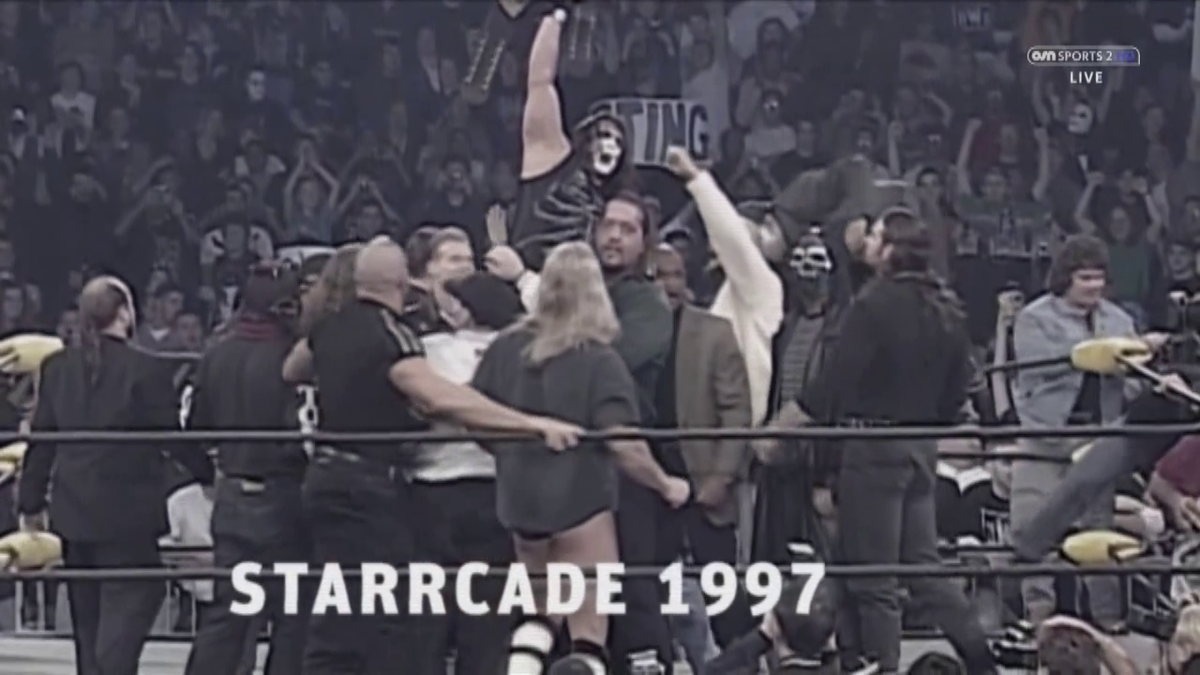 They showed a lot of recap and video packages to make the Divas Title/Nikki Bella’s reign seem important. If only they’d done more of this on Raw there’d be less JBL chants. They wrestled with the crowd making genuine noise (!!!) until Charlotte rolled up Nikki for the pin, the title and her Dad’s pride. If you were watching Raw for the first time (which I think WWE hopes some people were) you’d think the Divas Title was a mega-legit-super-belt.

…ah wait it was Brie. Steph comes out to call it a DQ (which it wasn’t at Money In The Bank earlier this year, but whatever) but made the rematch for Night of Champions.

See, I thought this was grand because even if they lose on Sunday Nikki will have beaten the record so they dicked Charlotte out of not just the title but the accolade of stopping the record (for the pride of Divas or whatever the Revolution is about) so NOW there’s a reason for them to feud and there’s an emotional investment for the crowd to get behind other than ”cheer them they have ovaries.” I’d say this was the nearest thing the Divas division had to Rollins turning on The Shield.

Before, everyone hated the Bellas. Now they REALLY hate them.

And even better, this is exactly what Paige said would happen if the Divas didn’t unite against The Bellas. They didn’t unite and they’re still champ! How’s that for continuity?

Not that I’m saying the Divas Division is changed and everything is great in the world, Lord No. But they got a lot of things right at once in this show and I like to give credit where credit is due.

Rusev wrestles Cesaro in the death-spot usually reserved for Divas. Match was just an excuse for Ziggler to come out, give Summer Rae a gift, distract Rusev so Cesaro could win and then superkick Rusev after the match. Bloody hell Ziggler, laying it on thick there mate.

The Night of Champions video package people are tearing their hair out putting Rusev vs. Ziggler together and figuring out who the bad guy is supposed to be. So Rusev treated Lana badly after she said I QUIT on his behalf against Cena. Ziggler defended her so he’s the good guy, right? Except Ziggler is intent on ruining Rusev & Rae’s relationship by towelling near her on Raw and playing tonsil hockey in front of the new couple. Maybe Ziggler’s a good guy but loves women in a relationship, like James Bond. Or Idi Amin.

Oh and the main event of Sting vs. Big Show went a few minutes before Rollins ran out for the DQ and they turned it into a tag match with Cena. The good guys won. I think someone finally looked at Sting’s win-loss record and thought ”fuck”, hence the two quick wins before the old man wrestles the WWEworldheavyweightUStitlechampion on Sunday.

Bad times: SEASON PREMIER, Ziggler’s a sex-pest, SEASON PREMIER, Netflix is shit why would you want Netflix fuck ’em I heard you can watch Mr. Nanny and Suburban Commando on there with er that guy 9.99 9.99 9.99

Better than last week’s show but that was never in doubt.