For me, Ken Kennedy is up there with the likes of Ahmed Johnson and John Morrison as wrestlers who looked like can’t-miss prospects for WWE that missed. Let’s have a look back at his most infamous moments in WWE that changed the projection of his career and see what was his fault and what was simply bad luck.

1. Wins Money In The Bank briefcase at Wrestlemania 23

Don’t let negative nancies tell you different, Kennedy was over as hell during 2007 thanks to his mic skills and ability to repeat his name, so winning MITB felt part of his natural progression to Mount Olympus with the other headliners.

Kennedy cut a promo soon afterwards about cashing in MITB at next year’s Wrestlemania (which even if none of these events happened, I doubt would have happened.) Smackdown World Champion The Undertaker was diagnosed with a torn right biceps on May 1st and because he’d be out a minimum six months, WWE decided Kennedy should cash in. Undertaker demanded he lose the title in a match rather than vacate it and Kennedy was chosen over Undertaker’s then-rival Batista to be the one to defeat him, so Kennedy must have been shitting happy pills.

Kennedy suffered a suspected triceps muscle tear just four days later on May 5th, taking him out for approximately six months. No-one else on Smackdown was deemed suitable enough to beat Undertaker so the Ultimate Opportunist Edge challenged Ken to a match on Raw for the MITB briefcase and beat him in six seconds.

This made Ken look like a jabroni, but he was going to be out of action for a while so no big deal. Edge cashed in a day later and Kennedy went to the doctor…to be told he’d suffered a haematoma that only needed a few weeks to heal. Kennedy didn’t wrestle on Backlash, Judgement Day, Vengeance or Great American Bash as the Smackdown main event program rolled on without him until the smell of defeat was no longer lingering around him.

Prosecution: What back alley quack was Kennedy talking to that’d confuse a haematoma with a muscle tear? Are they on the same Wikipedia page? He could have saved money by diagnosing himself, Kennedy was so frequently injured he’d have known what type of injury it was in seconds.

Defence: Kennedy was days away from being the hand-picked guy to beat the fucking Undertaker and winning the World Title but he listened to a Doctor whose job it is to know these things. Kennedy could hardly discharge himself from the hospital like in an action film when WWE needed a reliable non-injured champ.

2. Scheduled to be Mr. McMahon’s son

After the Vince McMahon is Dead storyline ended prematurely (something about it being insensitive after the Benoit tragedy), the next big thing in WWE was the Who Is Vince’s Bastard Son storyline that seemed custom-designed for Ken to be revealed as Vince Junior and become a big deal a few months later than planned. Kennedy is Vince’s middle name, no-one else seemed to fit from a storyline standpoint and even if Kennedy got injured he could still do skits. Win-win!

Well that whole Benoit tragedy got a lot of media attention (something about wrestlers killing their families being a big deal, I don’t know) and things got so bad WWE started throwing their wrestlers on news shows to cool things down as normal people were asking ”why the fuck are all these wrestlers dying so young?” Everyone who worked for WWE came off bad on these shows, including John Cena on Larry King Live trying to create confusion by trying to mix testosterone and steroids by saying ”Benoit tested clean for all anabolic steroids,” but that all got ignored when Kennedy went on Fox News.

He claimed wrestlers like Brian Pillman and Eddie Guerrero made the decision to take steroids before they came to WWE and the life-styles were completely different back then. Also WWE’s strict drug-testing policy levels were the same as the NFL, 4:1 testosterone to epitestosterone level. They’re 10:1.

Kennedy ”I’ve been drug-tested five times since coming to this company.”

Signature Pharmacy disagreed and produced the receipts for drugs purchased by wrestlers well after the Wellness Policy was introduced. Kennedy’s name was on a long list that showed he’d bought the steroids anastrozole and testosterone as well as the HGH somoatropin between October 2006 and February 2007.

As a result, Kennedy showed up on the Sep 3rd Raw to interrupt a McMahon segment to tell Vince he was his son. Some lawyer immediately showed up to say ”no he isn’t” to kill the storyline deader than Audrey Horne and Agent Cooper hooking up on Twin Peaks. 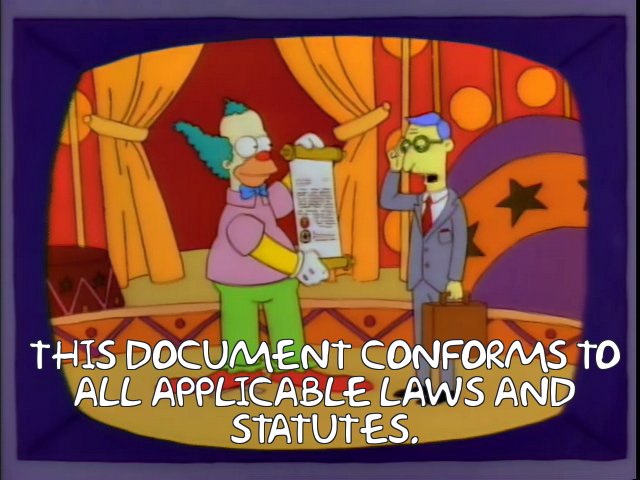 Hornswoggle was revealed to be Vince’s Little Bastard the following week, possibly because of Vince’s sense of humour but also because no-one could have filled that role. Jason Jordan was only six.

Prosecution: Christ Kennedy, usually when people make WWE look this bad they have the good sense to quit. Or be Randy Orton. Either way, thanks for defending the Wellness Policy and then breaking it immediately so we HAD to punish you to demonstrate it worked. Cheers!

Defence: WWE’s knee-jerk reaction to send wrestlers out there to denounce the evil, biased media while assuming their wrestlers were all clean was stunningly naive considering steroids were found in Benoit’s house. Not even a quick meeting to ask ”before we put you guys out there, anything you wanna tell us?” before deciding to send CM Punk to every media appearance? I mean, what was Kennedy supposed to say? ”Yes, I’m on HGH. Do you want some? I brought enough for everyone!” This is as much WWE’s fault as it is Kennedy’s given how many big names were on that list.

3. Wrestles John Cena in the main event of Raw

October 1st, still in 2007 because Kennedy didn’t have an exciting enough year. In their first ever singles match, Cena tore his pectoral muscle giving Kennedy a hip-toss early in the match.

Cena carried on and won the match as planned and got attacked by Randy Orton to build hype for their No Mercy match that Sunday….

…which didn’t happen due to Cena’s injury. Kennedy wasn’t considered to replace Cena and got stuck in a forgettable six-man tag while Orton took storyline responsibility for the injury because he’d been feuding with Cena for months.

Prosecution: I’m shocked the wrestler Paul London described as the clumsiest guy he’d ever wrestled could somehow injure the biggest star of the company executing a basic move. At least Cena got to take some time away from this whole Benoit Tragedy thing and is still squeaky clean to this day.

Defence: It’s wrestling! Injuries happen, even to superstars like Cena. That’s why WWE has back-ups like MITB…oh. Well you know what I mean.

After spending 2008 as Just Another Guy (even though he’d feuded with and defeated Shawn Michaels at Armageddon 2007), Kennedy dislocated his shoulder on August 4th and took time off to also record Behind Enemy Lines: Columbia. He had a big return scheduled for the May 25th 2009 Raw only to give Randy Orton this belly-to-back suplex:

Kennedy was released the next day.

Here’s Kennedy’s thoughts on the incident from Wrestlezone:

Before we went out there, [Randy] said ‘No matter where we are, I’ll put you in a rear chin lock when they tell us to go home, give me a belly-to-back suplex and we’ll go home’. So, came time for the match, he puts me in the rear chin lock and he goes ‘Do it now’ and I picked him up, dropped him, and made my tag, finish went down, went to the back and Randy was in the gorilla position holding his neck saying that I dropped him on his head.

Okay, well I haven’t seen the video tape, so I don’t know. If somebody tells me that I dropped them on their head, you know, I’m going to feel bad about it. That’s the last thing I want to do. Besides that, here I am coming back from being gone for ten months, your worst fears are kind of recognized. You always wonder am I going to remember how to wrestle or am I going to be rusty. So, we continue to go back to the trainer’s room and Randy’s getting checked over by the trainer and everything and he gets big bags of ice put on his shoulders and his neck and everything and he’s walking all hunched over…I mean, walking like he literally got his neck broken. I’m very nervous for his health and also why this really looks bad for me.

So, I went back to my hotel room, got a little bit of sleep that night..not much..got on the plane early the next morning, went straight home and…reverse a little bit…he also lectured me for about 30 minutes on how to properly take care of somebody, you know, like it was my first day stepping foot in a ring. And this took place in his private dressing room, by the way…the next day I go home and the first thing I did was run upstairs and check my DVR which is in HD and I fast-forward, rewound, and paused, and slow-mo’d probably about 20 or 25 times and you can see clearly that he lands as flat as you can possibly land. He lands a little sideways, a little crooked. His head was facing rampside rather than straight back opposite hard-cam, but his neck…and you can see on the video…his neck never even comes into contact with the mat, which makes me question why he then would go back and get his neck iced up. I mean it didn’t make any sense to me. Or his shoulders.

So, I mean…I don’t know, if you see the video, it’s plain as day. And I talked to somebody else within the company, actually a couple other people, who said that there were similar situations many, many, many years ago where somebody said ‘Hey, this guy hurt me’ and caused a tremendous deal of heat for that person backstage and when the video was reviewed, oh, lo and behold, that never happened.

You know what, anyone can speculate all they want. It’s not going to change anything, so I would just assume move forward and deal with positive things in my life.

Prosecution: So Orton complained and had Kennedy shit-canned, big deal. The buzz was gone, at least one headliner didn’t like him and this list demonstrated he had a black cloud above him. WWE isn’t a soup kitchen and he landed on his feet in TNA plus Kennedymania was hardly running wild during his comeback match when he was getting beat up for ten minutes and the crowd were chanting for Cena. Who’s watching Raw thinking ”you know what this show needs? The guy that killed Eddie and Umaga.”

Defence: If you watch it in slow-motion Kennedy is right, Orton lands on his back.

So Orton decides he doesn’t want Kennedy around anymore and that’s that? The paragon of virtue and only member of the roster who sustained no punishment for being on the Sports Illustrated list? The guy who freaked out on TV when Kofi missed a spot? I know he’s worth a thousand times more than Kennedy but WWE had invested a lot of time to discard someone for an exaggeration.

So what do you guys think? Was Kennedy filled with bad karma or was he deserving of the negative booking (and employment) WWE gave him?