In no real order, here’s some of the best botches from the Money In The Bank PPVs/Network Specials over the years because all the respectable sites have their ”MITB 2011 is really good” articles sorted so I might as well continue to be miserable and focus on the negative.

John Morrison gives Randy Orton the Anthony Pettis springboard kick then mistakes the cumbersome object behind him for Ted Dibiase Jr. (easy mistake to make) and takes it out.

Mark Henry and Big Show’s 2011 feud would produce many whomp-ass moments (like Show’s top rope elbow at Survivor Series) but this wasn’t one of them. Henry dropkicks some steel steps which barely move and Show has to sell it like he’s walked barefoot on Lego. The unintentional comedy would continue after the match when Show was selling his injuries and the crowd I guess were supposed to be like ”oh my god I hope doesn’t die” but chanted for CM Punk instead.

The very end of the MITB Raw match saw ADR removing Rey’s mask and shoving him off the ladder in the confusion. Nice match ending in theory. Sadly for him, ADR created a Rube Goldberg machine with Rey’s ladder not falling all the way, bouncing back and taking out both men instead, with ADR dusting himself off and winning the title anyway. It served as a nice metaphor for ADR’s WWE career, a lot of hype followed by an implosion followed by him inexplicably winning the title anyway. 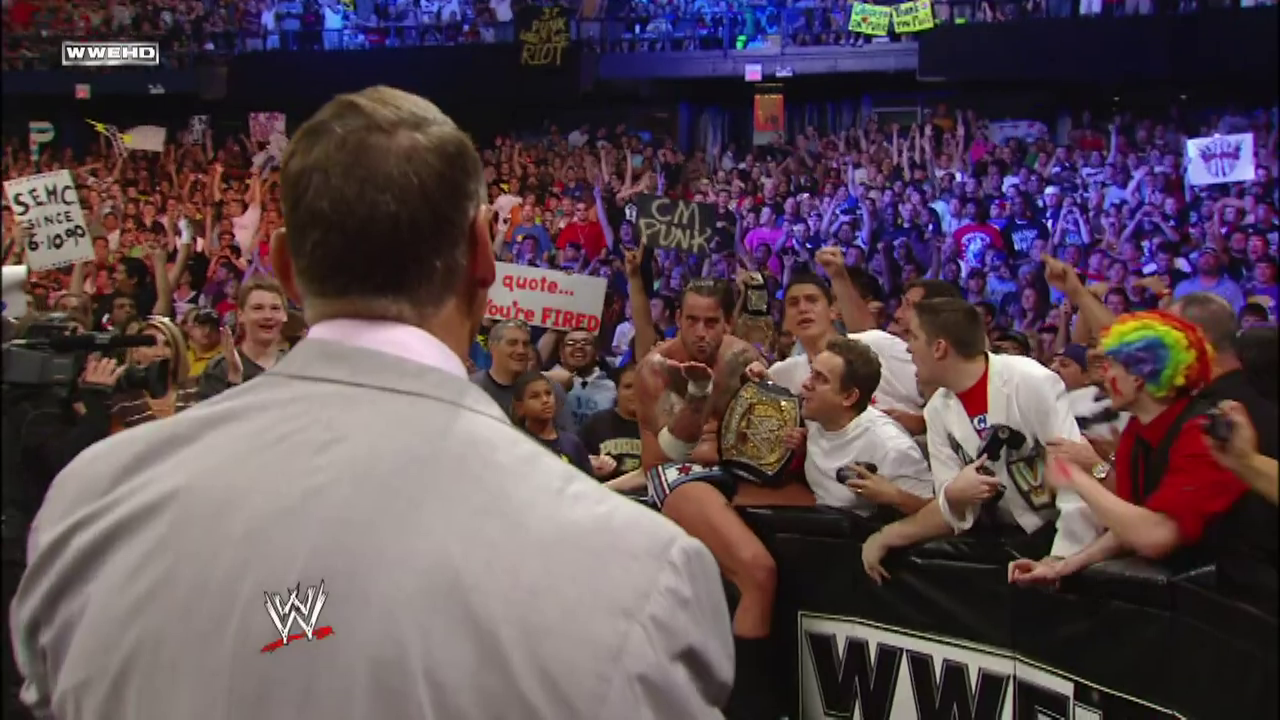 Honourable mention: everything about the Summer Of Punk immediately after this moment.

Sin Cara messing up while someone holds a SIN ENOUGH sign in the crowd then kicking Dolph like it was his fault is the most Sin Cara-y moment to ever Sin Cara. And like Amiga he’s still somehow around in some form or another.

Cena won MITB by deflecting Big Show’s punches with the briefcase…but the device unhooked before Show was halted so Cena had to awkwardly pause and carry on until Show fell off. 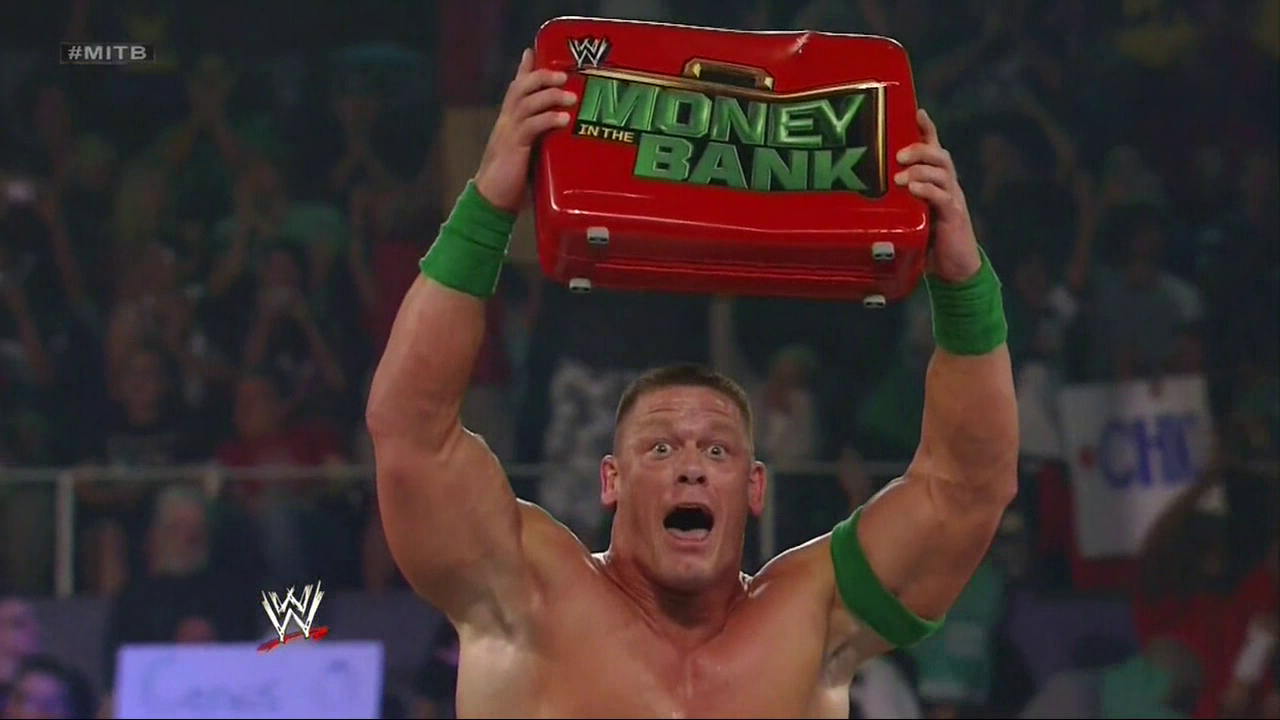 His face redeemed it though.

Sheamus falls like Michelle Joyner in Cliffhanger. And oh yeah, I’d forgotten about RVD re-appearing in WWE in 2013. Then again, he probably has too.

Paige and Naomi demonstrating why they were still called ”Divas” in 2014. 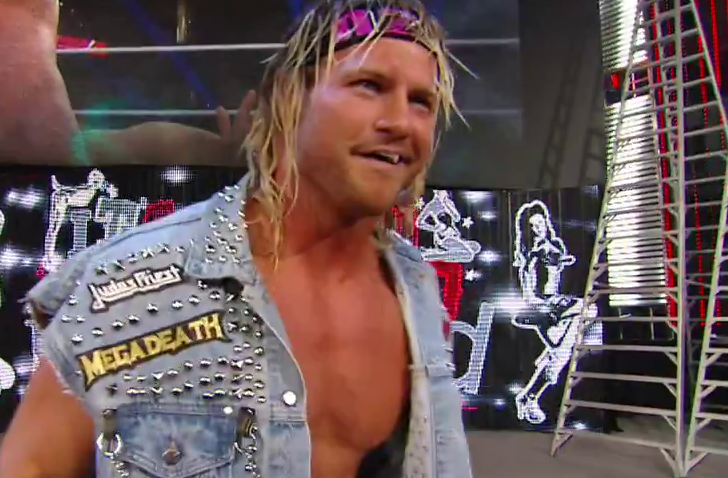 Ah, good ol’ Ziggler’s Chinese bootleg ”Megadeath” patch when any real (or at leas half-real) fan of rock knows it’s mis-spelt as Megadeth so it can be trademarked. You’d think Dolph would be familiar with their music, he’s based his entire career post-2013 around Selling But No-One’s Buying.

The dog’s dinner that was the last few minutes of the Four-Way tag match could fill an article by itself. We’ll put this match in a George Foremen grill and focus on Enzo flubbing the set-up to getting kicked in the face. Real life would try again in a few years time and wouldn’t miss.

And also Big E breaking up the pin and scooping up the ab-less Anderson only for Gallows to wait around for someone to remember their cue like a guy who’s just lost his connection in Street Fighter V and the game hasn’t realised yet.

Not many would have bet on two well-oiled machines such as New Day and Usos messing up during last year’s event but here we are, complete with handy BOTCH sign in the crowd in case it wasn’t clear enough. By the way, if you’re curious how New Day is expected to do this year, here are the MITB odds for June 17th.

Thanks for reading this click-bait disguised as a collection of GIFs disguising as content, depends on if loading a dozen GIFs on one page is what people want to see. Until then go follow me on Twitter for much the same.